Review – Lust from Beyond 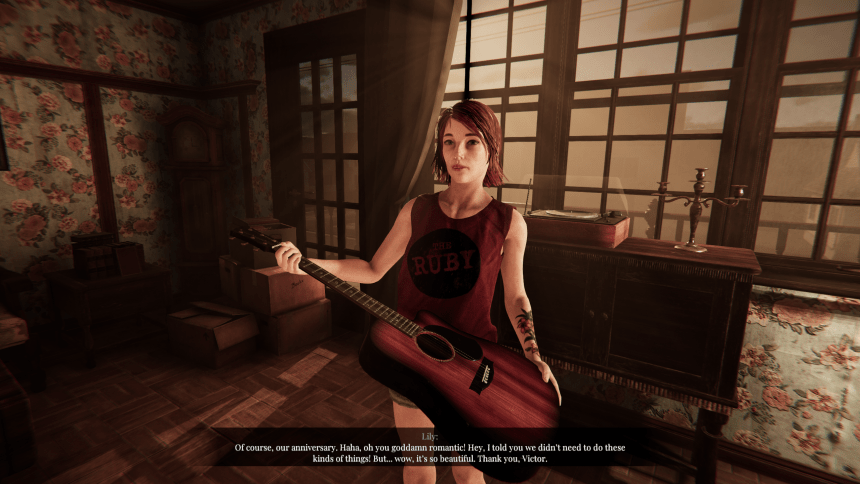 Curiosity overcame me this time. There are some things in life I never thought I’d associate with sexual content, and Lovecraftian horror is one of them. I was very curious to see what Lovecraft’s monster would look like. Tentacled monsters, crazy beasts with huge mouths on their heads and multiple rows of razor-sharp teeth, and sea monsters aren’t exactly sexy. Will it just be a tentacle of henna? I can’t be the only one confused about this. Either way, sexually oriented adult content is not the kind of game I gravitate towards, but Lust from Beyond seemed to offer a lot of interesting horror and design elements. Did it make me excited or sad? Be careful, because everything will get dirty.

Victor is a little rough on birthday sex. It’s time to help. 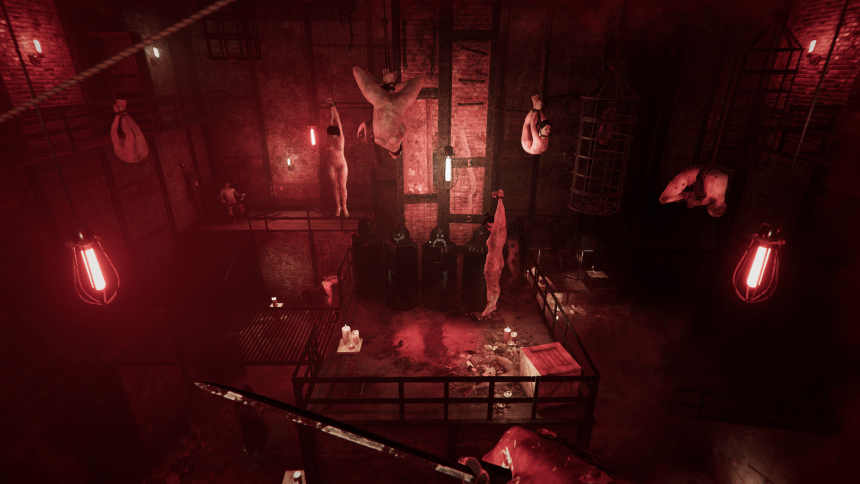 The blood room is just one of many scenes involving the Scarlet Lodge.

The ecstasy cult takes a very different approach; they actually use consent in their orgies and do so without torture or killing. We learn that there is a cancer in the kingdom of Lasstgaa that is slowly eating away at it and making it bad. Cult of Ecstasy visits the realm often to help heal and enjoy the unique design. These parts of the game are my favorites. Exploring Lusst’ghaa and its crazy Lovecraft and Giger inspired designers is actually a lot of fun. You’ll meet creatures, collect powers and solve puzzles. Unfortunately, things only get better in this area in the final third of the game.

Overall, I enjoyed the story. There are a lot of twists and turns, most of which won’t shock you, but it’s interesting enough to keep you hooked. Some parts seemed drawn out, and some parts of The Scarlet Lodge just didn’t appeal to me. However, the addition of weapons, tools and systems kept Lust from Beyond from becoming a walking simulation. Yes, in some cases you have the ability to fight opponents. Armed with a knife and later a gun, you can take out various enemies. However, don’t expect to have problems in every situation. 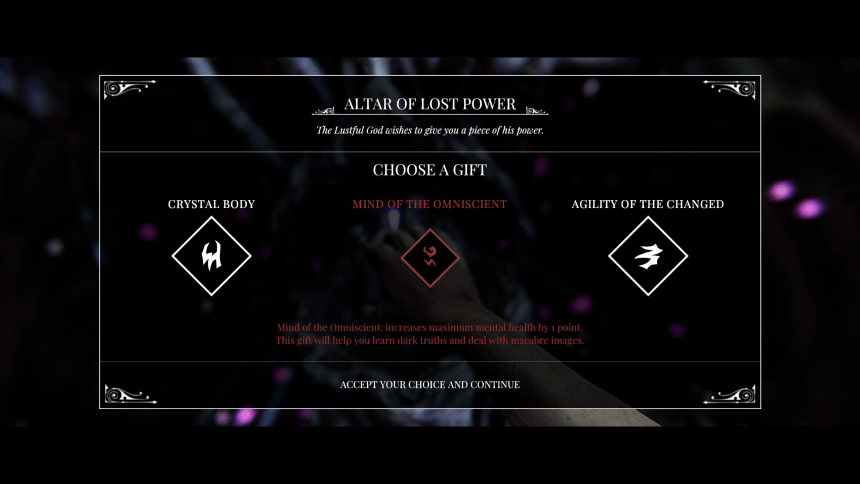 There’s a panic bar, similar to Amnesia, where you lose your mind if you look at something particularly confusing or scary. If you don’t use pills to restore your mental health, you could slip up and go crazy. Unfortunately, I never felt like there were enough situations where I could go crazy. You’ve always had enough medicine. There are also improvements you can find in Lusst’ghaa that can improve your health, mental health or exercise. Thus, the rise in the level of reason has made the system almost meaningless.

Lusst’ghaa’s puzzles will also evolve as you unlock your main skill. I have to say that a few of the puzzles got me thinking about the solution. However, most puzzles are self-explanatory or require you to explore and use objects in a certain order. While the bulk of Lust is exploration and background puzzles, it’s a shame that the movements are so clunky. 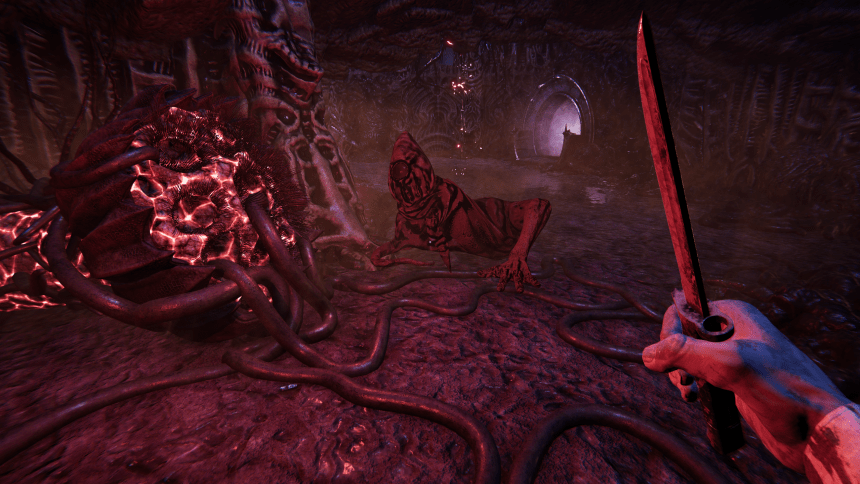 You must feed the infection by killing the animals next to it. This way you can go through the zones.

Visually, the Lust looks good on the outside. Most environments, especially in Lasstgaa, are well designed. There are nice details throughout and pretty good lighting that makes some scenes look better. This is very clearly in a different area. Some of Lasstgaa’s paintings and drawings are impressive and I enjoyed exploring these places. As the areas opened up to huge Lovecraft-inspired tombs, and then I walked along Giger-inspired paths, I was visually engaged the entire time. There are a few areas, especially in the actual segments, that have poorly textured parts and objects, but for the most part the environments are well done. Unfortunately, the character models need some polishing, which is a shame when it comes to the sex scenes. 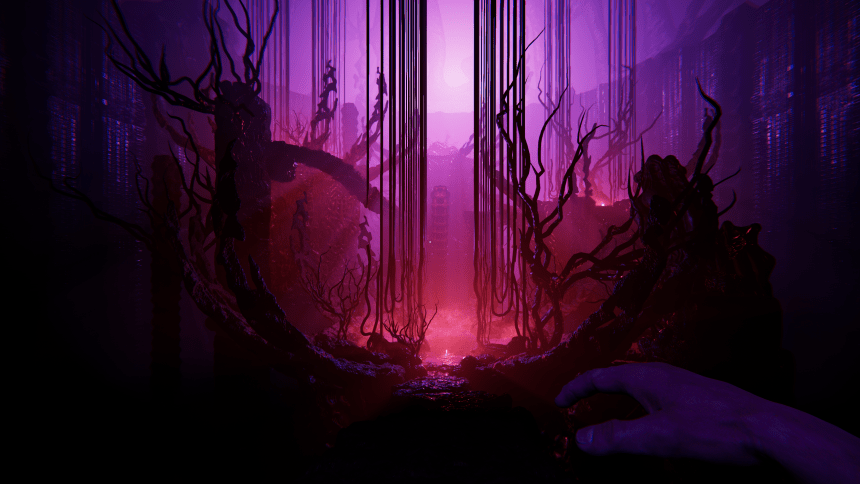 Lusst’ghaa has some very nice designs that made me wait for the next areas.

The sound design is just outwardly salacious, the weakest department of Beyond. The voice acting ranges from very poor to just passable with a stultified performance. The dubbing itself was often the cause of many unflattering moments in the scene. The general sound effects are present, but don’t add much to the scenes and are of poor quality. The same goes for the soundtrack. There is something there, it tries to bring mystery and suspense to the scenes, but it never managed to captivate me like a horror game should. Sound quality, well-used effects, and suspenseful music are key elements of the horror game, and I felt like they weren’t all up to par.

Lust Outside is now available on PC.

A copy of Lust from the Other World was made available by the publisher.

How do you load…